As I mentioned last week, my dog Dobbs died just over a year ago. (You may remember him from this post, which I'm so glad now that I wrote, even though -- or perhaps because -- it makes me cry every time I read it.) He was the funniest, sweetest, most annoying dog ever, and I'm truly sorry you never got to meet him. You would have loved him, even as you were strongarming his nose away from your crotch.

He'd had a tumour removed in the summer of 2011, and we were warned there was a 50/50 chance the cancer would return. Dobbs wasn't an old dog, but he wasn't a young dog, either. He was ten years old, and we didn't think it was fair to subject him to multiple surgeries as we raced to stay one step ahead of the cancer. In the end, when the second tumour appeared, it was extremely aggressive, which was a blessing. An awful blessing, but still, I'll take my blessings where I can find him. One week he was his usual bouncy, goofy self. The next week, he was unable to even get up and walk around. We're lucky to have a vet who makes house calls. When Dobbs's time came, it was at home, in our arms, with gentle assistance from the vet. He was mourned by many. You never think about how many lives your pets' lives touch until they die.

It took us a while to work our way round to the idea of adding another dog to our family, but look what we went and did last week: 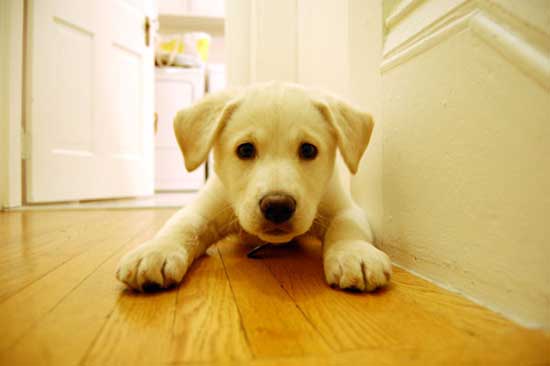 Meet Gunpowder Gertie, scourge o' the Kootenay River. (Namesake story here.) You can call her Gertie for short -- Gertrude when she's naughty. (Note: We call her Gertrude a lot.) She's a nine-week-old Lab/Husky/Tasmanian Devil cross. Her hobbies are digging in snow, chasing the cat, and chewing on pantlegs, hats, mittens, hair, toys (not her own), tables, and children. On the plus side, she was housetrained in four days. There's hope.

Part of the reason why we needed to wait a while to get a dog was because Dobbs left some pretty big fuzzy boots to fill. He can never be replaced, but he raised the awesomeness bar almost impossibly high.

Another part of the reason why I needed to wait is because, man oh man, puppies are a lot of work. Not  quite as much work as kids, mind you, but having a puppy around is a lot like having a hyperactive toddler. A hyperactive toddler who likes to eat the chewy surprises she digs up in the cat's litter box and can't be temporarily anesthetized with television.

(There's a book angle here. I'm getting to it.)

While Dobbs was born with a greater-than-average level of awesomeness in his DNA, what made him possible to live with was training. Lots and lots of training. He was a Portuguese water dog, after all, a breed whose defining traits are curly hair, intelligence, charm, barkiness, bounciness, moochiness, and general spazziness.

I am an irreligious person. So no one was surprised more than I when we turned to an order of monks to offer guidance in the ways of dog training. But when it comes to understanding how dogs think, what motivates them, and how to communicate with them, the monks of New Skete get it all right. Their order has been breeding German shepherds and training dogs for 25 years, and they know what they're talking about. They want you to know, too. As trainers, they've seen what happens when well-meaning people get off on the wrong foot with training their dogs -- especially with bigger dogs -- and they're really good at explaining why owning a dog is fun, sure, but it's also serious business.

John and I devoured the monks' books -- The Art of Raising a Puppy and How to Be Your Dog's Best Friend (both of which have recently been released with a lot of new material, and both of which are also available as ebooks) -- and man, they were so helpful to us. We have the monks of New Skete to thank for the fact that, despite Portuguese water dogs' notorious tendency to be barky and jumpy, we were able to teach Dobbs not to bark or jump (er, most of the time, anyway).

(What's also important to me: the monks explain it all in plain, non-nonsense prose. I love dogs, and I totally get that there's a fascinating deep and primitive connection that we share with them. But for some reason, when I read about this fascinating deep and primitive connection in flowery prose, it makes me want to break things. If dogs could read, I bet it would make them want to break things, too. I mean, on top of the usual things they break just for the hell of it.)

I'm not a big fan of the Monks, although I know that they no longer recommend the alpha roll and have removed the passages about hitting your dog from their texts, which I'm happy about. I no longer think of their books as dangerous.

Much of the info in their books is now outdated, though, as they compare dogs to wolves and suggest training techniques based on old, flawed behavioral studies done on a group of unrelated, captive wolves. These links explain more about those studies, the alpha/dominance myth, and why it's useless to compare dogs to wolves in the first place: One, Two, and Three. Wolf expert David Mech's site is also interesting.

This isn't a training book, but I highly recommend Patricia McConnell, PH.D.'s book The Other End of the Leash if you'd like to learn more about how dogs think. I found it to be an engaging and informative read. Pretty much anything by Dr. Ian Dunbar is going to be good, and Jean Donaldson's The Culture Clash is also a great book! I find dog behavior and training fascinating, but even if you're not quite as into it as I am, these writers all manage to educate without sounding dry or academic.

Gosh, I had no idea the monks were controversial. It's been years since I first read the books, and I've just been skimming them these days, so I don't remember them advocating hitting. Interesting to note that they've amended this. I just remember that we got some great (non-violent) tips for curbing Dobbs's tendency to bark and jump excessively.

I'll check out the links you suggested and see if my library has the other books. Thanks for the recommendations!

this isn't about dogs, just wanted to let you know it's nice to have you back :)

Did blogger eat my comment? Take me back...
So happy to see you here again. Let's talk books and dog training!

Carrie! Hi! I suck at Twitter, so I'm glad to see you here.

Do you have a dog, too? Tell me more!

I am fostering one--my first dog experience. It is weird, but great. There are some pictures of him on my blog. Remember where that is?

i will come again


Behind Kink - Behind The Scenes Of Kink

Wow really cute dog. I have like this one and I love him a lot.
Best uk dissertation


First of all i am saying that i like your post very much.I am really impressed by the way in which you presented the content and also the structure of the post. Hope you can gave us more posts like this and i really appreciate your hardwork.

It's a fact that your blog posts are so unique and interesting and I enjoys a lot while reading your posts because you explained your post very deeply in a very easy and clear language. Thanks for your support and Happy Blogging :D

How do you know when your dog is happy? Maybe it's the way they wag their tail, or how they zoom around the room when you come home. If you're like me, you probably just know your dog is happy, but you can't quite explain how you know. Dogs feel emotions similar to ours, but they can't express them like we do.Phd dissertation writing service

i found it so amazing Kik for PC

“I am extremely pleased with Mr Lee's Loan service and your suggestions have helped me get a very good home loan deal. I would be pleased to recommend your services to my friends here looking for a loan.”
Don't go anywhere else if you are looking for a loan. Mr Lee is the best. I highly recommend his services. The best I have ever had the pleasure to work with his low rate loan. ”This is Mr Lee Contact just if anyone here is looking for a loan.Whatsapp: +1-989-394-3740.  &  Email: 247officedept@gmail.com

Hii I am clora mendi. In this quarantine, I want to improve my PC skills and I found the best free software website. first I found https://patchhere.com/dgflick-album-express-latest-free/ this is a free software. you should also try this software.