BOOKS: He's Super! Thanks for Asking. 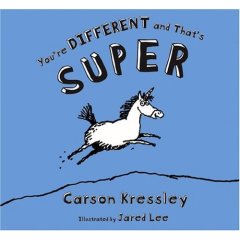 Carson Kressley, the queerest of the queer eyes, has written a children's book. It's called You're Different and That's Super.*

I think it's about unicorns.

*Customers who viewed this book also viewed The Boy Who Cried Fabulous.

I'd probably read it. I've always had a soft spot for Carson and his fantastically camp ways.

Who knew that in the world of children's illustrations there were horse drawing experts? Wouldn't that limit your field just a tad too much?

Carson totally makes the show, even though his egregiously terrible fashion sense sometimes makes me cringe. I LIVE for the first 10 minutes of each episode, when the guys rip apart the straight guy's home and appearance. So catty and funny.

Really, though, Ted is my favourite. He should have his own food show. I'd be president of his fan club.

His fashion sense makes me die a little inside every time he slaps on a pair of flip-flop or flip-flop-like shoes on anyone. Yeah, nothing's hotter than a guy going thwack-thwack, thwack-thwack when he walks. That said, I do think he's kind of adorable. He means well.

Ted totally should have his own show. But Kyan is my fave, only because well... he's purty.

I kind of wonder though just how many people will buy this for kids, rather than for themselves as some sort of kitschy coffee table item?

i bought this book for my own little frea..unicorn