Thanks to Jenny for her thoughtful email reminding me about this charming news story. I'd actually posted a link to it a couple of weeks ago, but it was late on a Sunday, so I think it got lost under the fanfare that traditionally greets my Monday-morning post. Heh.

Rushing to evacuate her home as a forest fire lapped at the edges of this high-desert town in May 2000, Kathryn Gursky took with her just one book, a British edition of "The World of Pooh," by A. A. Milne, bought when she and her husband were vacationing in Dorset some 11 years earlier.

When she returned to Los Alamos after the fire, Ms. Gursky, a 49-year-old former librarian, found that the rest of her 2,300-volume personal library had burned, along with her house and everything in it

Thousands of scorched tree trunks still range up the hillside across the street from Ms. Gursky's new home here, but inside the house, her library is well on the way to recovery. In September, Ms. Gursky received a birthday gift from her husband that earned her the envy of her book-loving friends: the complete collection of the Penguin Classics Library, 1,082 books sold only by Amazon.com for nearly $8,000.

Doesn't that just warm your cockles? Much as I love Rusty, and much as I know he returns the sentiment, I can barely get the dude to look at my Amazon wishlist. If he gave me the entire Penguin library (FYI: it's not eligible for Free Super Saver Shipping), my reaction would probably be to give him the ol' stinkeye and ask him what he did wrong.

Speaking of penguins, I finally saw The March of the Penguins last night. I know every single other person in the entire world saw it when it came out last spring, but since I'm destined not to see a new release till 2009, I'm now considering DVD releases to be an official big deal.

If you (a) haven't seen the movie, and (b) don't know shit about penguins, spoilers follow.

The March of the Penguins depicts the lives of Emperor penguins during their mating season, as well as how they raise their young. And holy crap, who knew how hard it is being a penguin? Probably because they always look so dapper and well put together, none of the rest of us chumps in the animal kingdom ever realized that a penguin's life is fraught with peril.

Here's a partial list of all the things that can go wrong just during the breeding season: But let's take the positive view and say mama, papa and baby make it through all this and have a delightful reunion. A happy ending? Ha, you wish. Your baby can still be taken by a rogue storm or 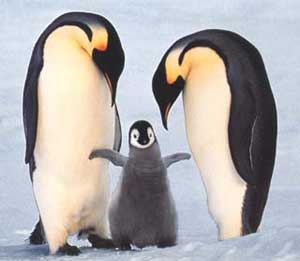 an evil predatory bird. And you haven't even taught it to swim in the seal-infested ocean yet.

(Look at that happy little guy to the right. He just has no idea.)

This movie really put being a parent into perspective for me. Half-starving? I do remember this one night when I was about eight months pregnant and I woke up really hungry, but I had a hard time rolling my huge belly out of bed so I woke up Rusty and asked him to make me some toast. At the time, I thought I was starving to death, but in retrospect I probably wasn't.

And much as I love to complain about Sam's two-hour awake window between naps -- which basically gives me enough time to take care of my ablutions, his ablutions, a lightning-fast mocha run, and aaaaalmost-but-not-quite-enough time to use the bathroom -- at least my little dude isn't sitting on my feet for three straight months. But that's probably only because the idea hasn't occurred to him.

Also, right now we're dealing with some teething issues, which is bothersome, yes. But at least I don't have to lose sleep worrying about some dickhead bird snatching Sam away from me the minute after I've squeezed the Baby Tylenol down his throat.

The worst thing is that these poor penguins don't even have a choice in the matter. They get these biological urges and they're helpless to control them. The lady penguin can't say to the gentleman penguin, "Look, I really like you and I'm interested in seeing where this relationship is going, but I'm not a hundred percent sure I want to have kids, so you should know that about me up front. Let's skip the next couple of breeding seasons and see where we're at in a couple of years, okay?" And the gentleman penguin can't reply, "I totally understand. With all the evil on the planet today, what with the predatory seals and birds and this fucking freezing wind, this is no world to bring a baby into. And while I can't actually count, per se, I think we may have a penguin overpopulation problem. Either that or I'm just seeing the same guys over and over. I can't tell. We all look alike to me."

On the other hand, penguins don't buy piles of parenting books that lie on their bookshelves unread and persecute them with guilt. So they win there.

The other thing this movie made me realize is that I hate nature. Oh, I like the pretty, fluffy, sun-dappled parts. And snowflakes. And the majestic bits also rock in their own way. But the life-is-nasty-brutish-and-short bits? Nuh-uh. Those bits make me cry.

And then invariably somebody tells me condescendingly, "Well, you know, Doppelganger, life is nasty, brutish and short." I KNOW THAT, ASSHOLE. THAT'S WHY I'M CRYNG. Frankly, I'm suspicious of anyone who doesn't get upset when they ponder life's brutishness. Spending a breeding season with the penguins would fix their clock good, I reckon.

One last thing: the narration in this movie drove me batshit bonkers. Morgan Freeman, you seem like such a nice man, and I know that as America's black Tom Hanks you're obligated to create a family-friendly vibe, but kee-rist. If I'm forced to see visuals of horribly frozen dead eggs and predatory birds killing cute little Pokemon-esque penguin chicks, and if I'm made to listen to the heartbreaking crying of a mother penguin when her chick dies, I'm not really buying what you're selling when you tell me elsewhere that old penguins just "fade away" or "disappear into the whiteness". Please kick the writer in the kneecaps for me. No, harder than that. Thank you.
Posted by Tammy at 12:40 am

Heh. It hasn't even had its theatrical release in the UK, yet.

We have to wait six or seven months for American movies to come out over here. Yet we only get the British stuff like Harry Potter six or seven hours before the North America. *pout*


Lining up for a midnight release of the most recent Harry Potter book.
Cost: Sleep.

Getting the number for that American girl on your Livejournal friends list who is perpetually spoiling books and movies for you then saying "What? It's been out for months!" then sending her a text message saying, 'OMG, [character1] hooks up with [character2]! AND [character3] DIES!!!'

There are some things money can't buy. For everything else, there's international time zones.

kEssy, you got the new P&P in September!
I called my sister in Scotland a few weeks ago to jabber excitedly about my plans to go see P&P on opening night on the 11th, and she listens patiently then drawls "Oh it's been out here for months...I should get around to seeing it...sometime..."
Still, I can somewhat understand the idiotic release-dates for movies around the world. Esp. for the UK. It's not like it has to be translated or anything.

I just watched this last night after reading your post, and I'm so glad I read your blog first. I felt way more prepared for the whole, "vanishing into the whiteness" parts. I still cried, but honking into a tissue box in the privacy of my own apartment is sort of nice.

Hot off the presses - if you're itching for a Penguin book, you can get the Friends and Family discount through Jan. 2:
Visit http://us.penguingroup.com - when checking out, enter promotional code "friend3" to receive 15% off your total.

There's a chance you're qualified to get a $1,000 Amazon Gift Card.