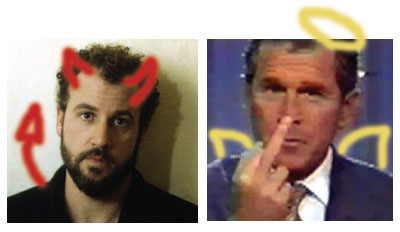 You know, ever since I read this article a couple of weeks ago, it's been nagging at me. If you're not into the whole linky-linky clicky-clicky thing today, in a nutshell this piece talks about how James Frey's publisher, Riverhead Books (an imprint of Penguin), has dropped him in the wake of the scandal about the lies and exaggerations in his so-called memoir, A Million Little Pieces.

As you regulars may recall, a while back I railed against the fact that, against my will, the media has forced me to know, if not care, about these random blips on the pop culture radar. Are you happy, media? Because now I'm finally kind of bugged. IS EVERYONE HAPPY?

(Admittedly, my forceful mood might be more than a little bit influenced by the second coffee of the day -- a cappuccino, to be exact -- that I recently consumed. I'm really not the kind of person who should be allowed more than one caffeinated beverage per day, but we were brunching with our friends Libby and Dan, who in addition to having the wholesome good looks and demeanor of a young Jack and Jackie Kennedy, know how to make a mean cappuccino. Hence my fired-upness. And hence this extremely long aside.)

When I first posted my thoughts and feelings about Freygate (you get that that's a tongue-in-cheek coinage, right?), a bunch of you posted some insightful comments in response. So I get that, while what Frey did was not in the same league as, say, torturing prisoners of war, it was worse than merely "unfortunate" that he did things such as appropriate a woman's death to feed his made-up narrative. Frey -- and his previous publisher, Random House, who printed A Million Little Pieces -- should be made to account for their choices.

But why do I get this feeling that Frey has been made into the fall guy for liars everywhere? And why, when so many of the famous liars on the media landscape are politicians and business folks who, oh, actually have the power to save or ruin people's lives, is a lone writer being castigated more openly and more resoundingly than anyone else?

Is it widely known in the U.S. right now that George W. Bush was warned DAYS before Hurricane Katrina about the enormous damage and loss that was imminent? Like, have you Americans seen the footage of Bush and the FEMA dudes being briefed in detail about the hurricane? Because this footage has been getting tonnes of airplay on CBC and the BBC for days and days now, but my understanding is that the word is spreading veeeerrrrrry sloooooooowly in the States. Please, someone correct me if I'm wrong, but this is the impression I'm under.

Will Bush come under the same scrutiny as Frey? And will he experience consequences as real and -- let's call a spade a spade -- financially punitive as Frey's loss of a seven-figure book deal? My cynical guess is probably not. Why is that?

Am I to understand that, in comparing the onus of truthtelling between a writer -- someone whose job description pretty much states outright that, yes, there may be some loosey-gooseyness with the facts -- and a politician -- someone who literally has the power of life and death in his or her hands -- we have greater expectations of the writer? And now we can all relax, confident in the knowledge that that uppity fibber Frey has been dealt with, and truth and honour have been restored to the world in general?

Seriously, what is wrong with us?
Posted by Tammy at 7:24 am

I'm sure this isn't even the half of it, but I'd just like to point out that Frey hasn't stacked the courts in his favor like Bush has.

"Is it widely known in the U.S. right now that George W. Bush was warned DAYS before Hurricane Katrina about the enormous damage and loss that was imminent?"
Yes.
"Like, have you Americans seen the footage of Bush and the FEMA dudes being briefed in detail about the hurricane?"
No, but then again I choose not to watch American news channels because it is sickening. However, the good folks at moveon.org notified me about it, and asked me to spread the word (which I did).
"Will Bush come under the same scrutiny as Frey?"
Absolutely not.
"And will he experience consequences as real and -- let's call a spade a spade -- financially punitive as Frey's loss of a seven-figure book deal?"
No way.
"Why is that?"
Because rich people like the Bush administration because he makes them richer. Rich people control the "news". Rich people (like Oprah) don't like to be lied to, unless of course it benefits them.
"Am I to understand that, in comparing the onus of truthtelling between a writer -- someone whose job description pretty much states outright that, yes, there may be some loosey-gooseyness with the facts -- and a politician -- someone who literally has the power of life and death in his or her hands -- we have greater expectations of the writer?"
It depends on who you reference as "we". I certainly have greater expectations of elected officials. However, I am constantly disappointed by them. I have what The Onion called (in 2003 I believe) "rage fatigue". At a certain point, kind, thoughtful, real Americans gave up. As much as most people dislike American democratic party candidates, at least they don't actively wish for the death and degradation of poor people. Wow. tangent.
"And now we can all relax, confident in the knowledge that that uppity fibber Frey has been dealt with, and truth and honour have been restored to the world in general?"
See above comment re: giving up.
"Seriously, what is wrong with us?"
Everything. If I didn't want to be close to my family, I would have left the country a loooong time ago.
-An actually angry American, not like the g-d Toby Keith song.

want to know what bugs me about frey's book?
the fact that it was A REALLY GOOD BOOK. i enjoyed the book, i ate it up in two days and raved about it to my friends afterwards, and when oprah came out and apologized on her show for it being a lie and all this uproar began, i just shrugged. i didn't care that he lied. he wrote a good book, regardless. if you get technical, all writers 'make up stories' don't we? so whoops, he said it was true and it wasn't. i wonder, if people took the time to look into every detail of a writers life, how much of the 'autobiographical' things are in fact not true, and likewise, how much of so-called 'fiction' is actually based almost exactly on some factual thing or truth?
it sucks that he lied, yes, but this isn't something the whole country should fling poo at him for. we have bigger Bushes to burn, and this guy needs a break so he can write another book, which i will be waiting to read.

Well, like the angry American of the above comment, I'm disdainful of tv news and rarely watch it, so I don't know how widely it's been reported. I've certainly seen it, but I can't answer for the other 298 million of us.

I agree that Bush should be held more accountable for lying than James Frey, but I'm not that optimistic about it. I think the current situation in the US is comparable to a playground snipe-off. When my daughter and her friends get into little fits with each other, they stand with their fingers in their ears going 'nah, nah, nah' when the other person is talking (or yelling). It's sort of like that all the time here now.

I watched Oprah the day she stoned Frey on her show. I had read the book over X-mas and knew soon into the book that this was an 'emotional memoir.'I couldn't put the book down , his little trick of not having normal chapters had me reading for 12 hours with little pee and food brakes here and there.
Anyway, my point is..I was fed up with Oprah and her shit. I wrote a letter to her show. Oh my god! Who does that?

You're pointing out something that is so typical and maddening about people [WARNING: Broad generalization ahead]: We'd rather pillory someone for a lesser crime (Frey) that face and deal with a much larger crime (Bush Administration). It's easier, not as messy, and can be walked away from without any sense of responsibility for the repair and aftermath. And we've expressed our righteous indignation and outrage for everyone to see thereby demonstrating our moral superiority.

Could it be that we do hold writers to a higher standard, because we're just so used to the lack of forthrightness on the part of politicians that we can't be bothered to care that much anymore? It's an interesting question. I bet there are a lot of answers.

May be urban legend, but I read that Jen Aniston's movie company owns the rights to Million Pieces and so she [Jen} only went on Oprah Show if she [Oprah] promised to hype the book. Thus, Oprah's fired-up-edness and face-saving. Liars, liars everywhere. For SHAME.

It's awesome that your blog is currently running an ad for JTLeroy.

Bush is a liar and a criminal, with money and political clout. His day is coming, and it can't be too soon. Unfortunately when that day comes, it will not include a prison sentence, merely him going down in history as the WORST PRESIDENT EVER!!! Still, the image of him being dragged, kicking and screaminng out of the whitehouse in handcuffs is my heart's fondest fantasy. I can dream.

Next to Bush, James Frey is just a two-bit hustler with no talent who pulled the wool over some undiscerning readers eyes. I'm not sure how he did this since his book is a pile of literary tripe. My 17 year old nephew is a better writer--hell, I'M a better writer. But fool people, he did. And worse yet, they felt sympathy for his lying ass. This type of jacking around is guaranteed to piss people off every time.

However, lying to people in order to start a war and then causing the deaths of thoudands of US military troops as well as tens of thousands of innocent Iraqi citizens . . . nothin'. Ironic, ain't it?

Thanks for the comments, everyone. It's nice to get feedback when you're starting to worry you accidentally took crazy pills.

And tuckova, funny coincidence, huh? I don't solicit the ads myself, and I don't announce my post subjects to my ad network. So, boy, somebody out there is on the ball.