According to the Wikipedia, Mary Godolphin is a pseudonym for Lucy Aikin, a noted nineteenth-century historical writer who "was remarkable for her conversational powers, and was also an admirable letter-writer." Notwithstanding that those are both admirable traits for which to be remembered, Godolphin/Aikin must also be recognized for one of her greatest gifts to the world of letters: versions of classic books rewritten in words of one syllable.

That's right. Books written pretty much entirely in one-syllable words. Godolphin was clearly a pioneer of the ...for Dummies series.

Godolphin rewrote several books in this seemingly odd way, including The Pilgrim's Progress, Robinson Crusoe, and Swiss Family Robinson. A progressive-minded Unitarian, she was apparently motivated by her desire to promote adult literacy (which at least answers my question of "What the eff?").

As I went through the wild waste of this world, I came to a place where there was a den, and I lay down in it to sleep. While I slept I had a dream, and lo! I saw a man whose clothes were in rags and he stood with his face from his own house, with a book in his hand, and a great load on his back. I saw him read from the leaves of a book, and as he read, he wept and shook with fear; and at length he broke out with a loud cry, and said, What shall I do to save my soul?

So in this plight he went home, and as long as he could he held his peace, that his wife and babes should not see his grief. But at length he told them his mind, and thus he spoke, O my dear wife, and you my babes, I, your dear friend, am full of woe, for a load lies hard on me; and more than this, I have been told that our town will be burnt with fire, in which I, you my wife, and you my sweet babes, shall be lost, if means be not found to save us.

This sad tale struck all who heard him with awe, not that they thought what he said to them was true, but that they had fears that some weight must be on his mind; so, as night now drew near, they were in hopes that sleep might soothe his brain, and with all haste they got him to bed.

You've got to wonder: if this was the most compelling text the publishing world had to offer back in the 1800s, maybe it's no surprise that people weren't making literacy a priority over, say, oppressing Ireland or learning to Morris dance. Can you blame them? 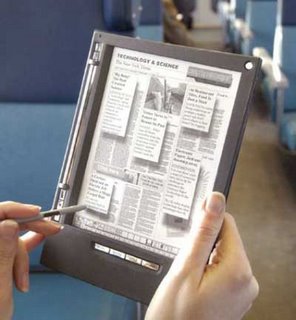 In somewhat related (but let's not kid ourselves, almost entirely tangential) news, all this looking at e-texts has reminded me that a new eBook reader has recently been released (or is about to be released; it's difficult to pinpoint exact details) upon an unsuspecting bookloving public.

I have an on-again-off-again thing with eBook readers. I used to download free e-texts, mostly classics such as Peter Pan and Pride and Prejudice, onto my Palm Pilot religiously back in the late '90s, so I was pantswettingly excited about the then-newly released readers. I longed for a RocketBook... oh, how I longed. Then they -- and my enthusiasm -- fizzled out at pretty much exactly the same time.

But this new reader, the iLiad... it has me dreaming again. Imagine being able to read in a darkened room or during a redeye flight without disturbing other people. Imagine being able to take DOZENS of books with you when you travel, thereby freeing yourself from the tyranny of luggage weight restrictions and crappy tourist-town bookstores. Imagine.

They're going to have to change the name first, though. The iLiad? I get what they're trying to do. And it's cute, sure. But I think the marketing department didn't twig to the fact that if they're going to copy Apple's product-naming conventions, they should at least observe that the letters after the "i" -- iBook, iMac, iPod -- form actual WORDS.
Posted by Tammy at 7:36 am

Also the Iliad was not, originally, a book.

iLiad? If that's the best marketing could come up with they might as well just give up and call it the iRead already. (Of course I still want one desperately. How sad is that?)

I'm with you, Anne. I would absolutely love to have all the e-books I've downloaded close at hand. I also tried to find a price. None listed.

Um, a bit more research and I came up with a possible of about $785 as of January. Ouch.

iRead? That's really good, actually. I'd totally buy that. Anne, you get a promotion to head of marketing.

I just did some research on other eBook readers, and it turns out Sony is coming out with one called the Librie. The hardware is apparently quite lovely -- lightweight and allegedly the screen is so low-glare that it's compared to reading on paper -- but Sony's e-text distribution system is absolute shit. It's entirely proprietary, so you have to order all your books from Sony's booklist, which one reviewer says has only 400 titles. Oh, and you're not buying the texts outright: you're licensing them for 60 days. Which means if you don't read a book within 60 days, it expires and you have to license it again. You can't even load the device with your own PDFs or e-texts. Oh, and also? Sony isn't bothering to distribute magazines or periodicals.

Kee-rist on a cracker. Who the hell was the moron who came up with this system? They clearly don't understand technology OR booklovers.

Hi, I just wanted to say two things: First, I have never heard of Godolphin and what she did, but I think it sounds fascinating! Thanks for bringing that up; I definitely want to find out more about her. (But you're right that the one-syllable version of PP is no better.)

Second, I am desperately looking for an ebook reader. I've never heard of iLiad, but there's no way I would shell out that much money on the device regardless of its features.