This very funny post over on Mike's site got me thinking about secret -- or not-so-secret -- unattainable crushes. I didn't post mine in the comments section of Mike's site because I was too embarrassed at the time, but I've given the matter some thought and decided to confess here: 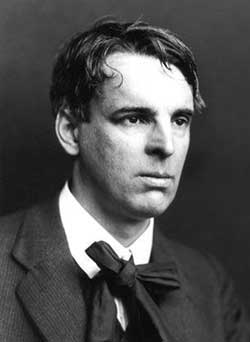 That's right. William Butler Yeats. I dig the man's poetry AND I think he is (er... was) a hot tomato.

I mean, check it out. From Yeats's poem "The Second Coming":

Turning and turning in the widening gyre
The falcon cannot hear the falconer;
Things fall apart; the centre cannot hold;
Mere anarchy is loosed upon the world,
The blood-dimmed tide is loosed, and everywhere
The ceremony of innocence is drowned;
The best lack all conviction, while the worst
Are full of passionate intensity.
Surely some revelation is at hand;
Surely the Second Coming is at hand.
The Second Coming! Hardly are those words out
When a vast image out of Spritus Mundi
Troubles my sight: somewhere in the sands of the desert
A shape with lion body and the head of a man,
A gaze blank and pitiless as the sun,
Is moving its slow thighs, while all about it
Reel shadows of the indignant desert birds.
The darkness drops again; but now I know
That twenty centuries of stony sleep
were vexed to nightmare by a rocking cradle,
And what rough beast, its hour come round at last,
Slouches towards Bethlehem to be born?

Come on. That's good post-apocalyptic stuff. Anarchy! Falcons! Blood! Lions! Thighs! Um, gyres! If that doesn't get you a little hot, I don't know what else to say. Gyres!

Don't you judge me.

When it comes to literary crushes, i'd have to go with a young Ernest Hemingway. We went to his childhood home on a field trip back when I was in high school, and we swooned over his pics.

I totally agree! I had a fellow English major who got drunk one evening and had a Yeats poem tattooed on her ass. It was a bad tattoo. You have to get about an inch away from her right butt cheek to even read it. She now teaches high school and I keep threatening to blackmail her!

If we're talking literary crushes, it's a toss-up between George Gissing (the guy in my avatar pic) and Gerard Manley Hopkins.

Aigh! My favorite poem. Can't say I have a literary crush, but I just remember being very impressed with that poem back in senior AP English.

OK, I completely change my mind. HH Munro is my man. And anonymous was me, by the way..

I'll fight you for Gerald Manley, Mike. And if I lose, I'll take John Donne.

Sylvia Plath was a hottie. Moody, but at least she didn't have all those creepy séances.

But I do love me some Yeats, I admit. The one that makes me swoon (in a manly, heterosexual way) is "Sailing to Byzantium." I also like this little ditty of his:

Oh, well, Em, if we're talking literary threeways, Yeats and I are going to want to borrow Byron when you're done with him. And now Mike doesn't have to choose between George Gissing and Gerard Manley Hopkins. Everybody wins!

I can see your Yeats, but if you're going to crush on the basis of a poem, how can you choose "The Second Coming" over "Leda"? No, really. You're taking "slow thighs" over "thighs caressed" and "gyres" over "strange heart"?

I'll get a crush on any writer. Ink stains on the fingers is sexier than a guitar around the neck. Computers eliminate the ink stains, I guess, but the sentiment remains true.

Funnily enough, 'the Flea' was exactly the poem I was thinking of. Thing is, if I was the lady in question, we'd never have had the poem. You had me at 'Mark but -,' John.

Also, excellent choice with old Oscahh, Em. Even if he refused to have sex with me, he could stand there and describe it whilst Mr Donne had his way with me, and I'd be quite happy.

Shit, I'm supposed to be going to class in a minute. Double shit, it's on John Rochester.

Well heck, let's just slippery slope from threeways into Free Love, because I'd like to add a young Robert Frost (jacked up eyebrow not included) to my mix. And maybe a little Edna St. Vincent Millay: "I find this frenzy insufficient reason/for conversation when we meet again."

Ohhh, I had an English teacher describe Byron as the Kurt Cobain of his day, and then he was played by Johnny Lee Miller in a BBC movie that only added to the fury of my literary crush.

And if I can't have Byron, it's Jack Kerouac all the way.