BOOKS: I Shelve, Therefore I Am

So yesterday's post got me thinking about all the shelving that I've discovered and that some of you nice folks have emailed me.

Give yourself a minute or two to look at this picture and understand what you're seeing. 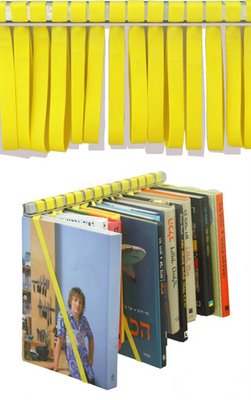 See, the books (or DVDs or what-have-you) are individually secured in those little strappy things that look not unlike the handstraps you see on the bus, and they sort of cantilever themselves into position. It's called the Joya Shelf, masterminded by the Israel-based 16:54 Design Group. Not content to just sit back and enjoy the credit for this rather nifty, if somewhat S&M dungeon-y, contraption, the folks at 16:54 try to also sell us on the fact that "when clustered, the collective top surface of the books or DVDs become another usable surface." People, people... you had me at S&M dungeon.

What I like about this regal_zzz shelving is that it's designed to make the most of funny nooks and small spaces by wrapping around corners. 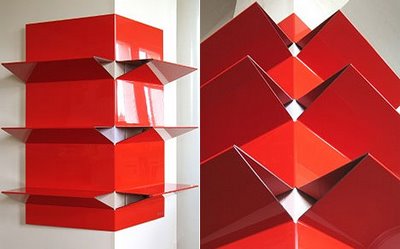 What I dislike about it is that I don't get how it's supposed to hold books. Why, oh why, is that such an impossibility for furniture designers? I can't tell you how many times I've been momentarily dazzled by the coolness of a shelving system, only to come up short when I try to visualize how my books aren't going to topple over the edges. Still, it's a zippy shade of red, and that goes a long way for me.

So get this. This free-standing set of shelves, from the Netherlands-based design firm Maartenbaas, is made of industrial clay, which is hand-modelled on top of metal skeletons, after which the entire surface is painted with colored lacquer. (Lest you think I actually know something about industrial design, I pretty much copied and pasted that from their website.) 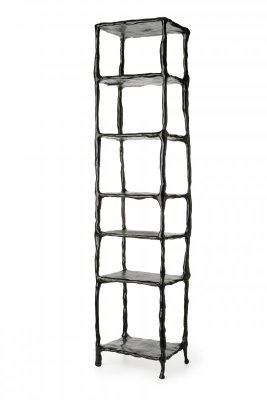 It sort of looks like something you'd find in a Tim Burton film, or on a set for a live-action Flintstones movie. Not my taste, and it seems more like display shelving than book shelving, but hey, at least people are trying.

Also from the Netherlands, but more to my taste, is this Variants shelving from Studio Roosegaarde. 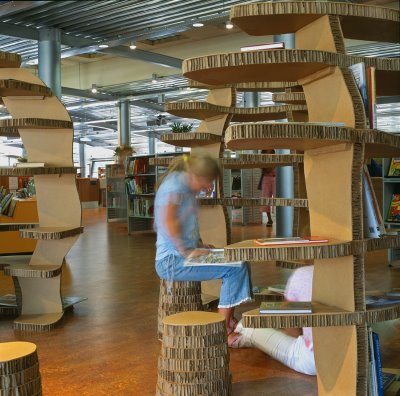 Apparently, it was specially commissioned and designed for several public libraries, which is exactly ninety-seven shades of friggin' awesome. My local library, bless its heart, uses the kinds of battered formica tables that one sees in United Church basements, except unlike the church tables, the ones in our library are also adorned with signs warning patrons not to leave their property unattended because there are thieves actively working in the library. But I digress. (But seriously. Thieves! In libraries! I can now pinpoint the exact moment when I lost my last vestige of childlike innocence.)

The final part of this post is dedicated to Carrie, who I know, like me, has serious respect for Serious Shelves. 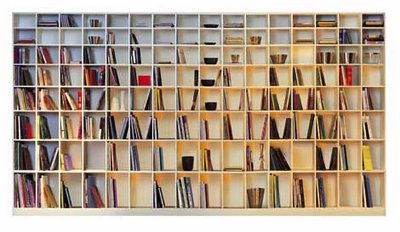 I'm not too proud to admit that I peed my pants a little bit when I first set eye on these OIKOS shelves. (This level of disclosure is what separates us serious bloggers from the also-rans.) If I had these bad boys in my home, I can't help believing that my world would be a better place. A better, bookier place -- where nobody steals your bookbag when you're not looking.

The Maartenbaas shelf also looks about as top heavy and unsturdy as Anna Nicole on a three-night bender.

And the Joya Shelf, while inventive, also looks like a great way to ruin paperbacks ... and a great way to receive blunt-force trauma to the head if the tensile strength of those rubber band (?) straps shot a hard back at you while you were watching 24 and eating some Breyer's. In fact, it could probably cause some Pavlovian fear of ice cream after that.

The Roosegaarde is nice, though, for a library, but woefully out of place in most homes, I'd imagine, unless you're an Ewok.

Ooo, the regal_zzz one would totally work for me, since all of the people who can't think of anything to buy me other than books have become annoyed trying to find ones that I don't already have, and have subsequently started buying me sets of bookends. However my tendency to walk into immobile objects leads me to believe that I'd probably lose an eye on one of those corners.

The OIKOS is the only one that's practical in the long run anyway, since no one I know (other than my weirdo mother) is capable of parting with a book once it's hit a shelf. And it would be like living in a library! A childhood dream come true at last...

Ohhhhhhh. Oikos bookshelves, you willl be mine....

The seats in the Studio Roosegaarde set look mighty uncomfortable. And I agree with Ganch's "Ewok" pigeonholing.

Some of the other shelves, though . . . mmmmmm.

Maybe it's because I have a toddler, but the regal_zzz just looks like a eyepatch waiting to happen.

I must concur with the majority - dull girl that I am - OIKOS looks well OISOME.

The Variants one looks as though if I put it outside on my deck birds would excitedly flock to it. In fact, that seems like a better usage to me.

Thanks lady.
Always creating desires in me.

Speaking of shelving and fetishes, I just found out that the nonist has Hot Library Smut ('the full-frontal objectification of the library itself') at http://thenonist.com/index.php/
thenonist/permalink/hot_library_smut/